Joanna Melville led the procession from the car park, playing a lament for her father, William Melville, on her flute. His achievements as an army engineer in World War II were among his proudest memories – achievements mentioned in dispatches (represented by the oak leaf on his memorial stone) and still remembered by his surviving colleagues. 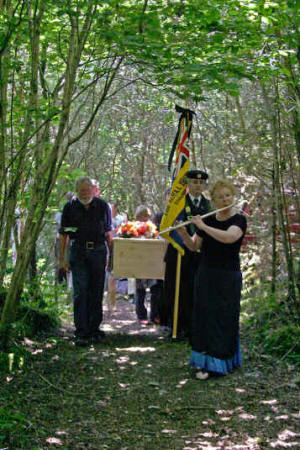 The British Legion flag was carried before his coffin as a symbol of respect.

When we cleared the brambles before digging the grave, we discovered a tall Scots thistle – the perfect symbol for the Scotsman who was to be buried there. 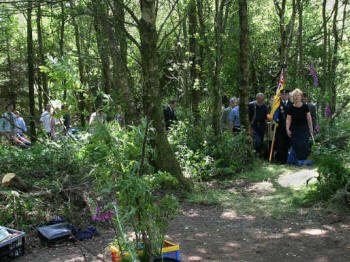 The procession arrives at the spot selected for Bill’s burial.

An informal celebration of a special life. Bill disliked formality but he loved music; so we sang the songs he used to sing when we, his daughters, were children. 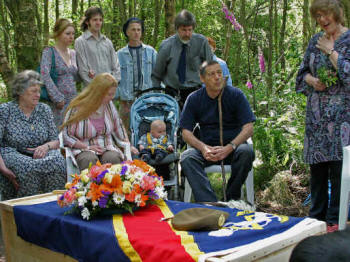 Sharing memories of a man we loved: the final goodbye.

He asked to be buried in a simple pine box; this was made by a local craftsman. We covered the coffin with a REME flag, on which we placed his medals and army beret. 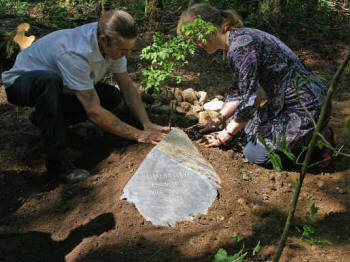 A wild rose at his head, a rowan tree at his feet.

Bill loved birds; they will sing for him here. 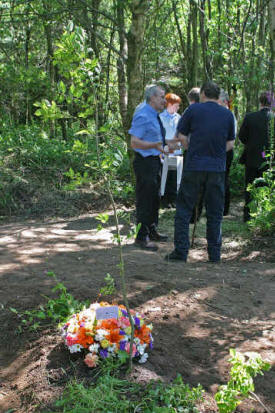 The mourners leave the grave site.

Wildflowers planted and watered, they will spread across the glade. 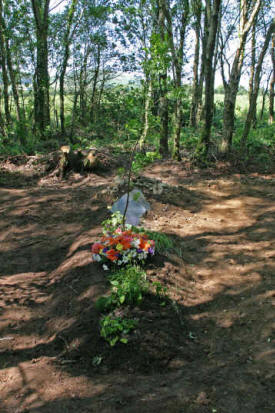 More will be added later – we continue to tend this woodland garden, transplanting the bluebells and violets that push through the paths. 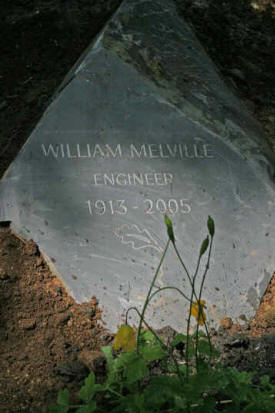 Bill’s simple headstone is made of local slate.

The yellow poppies represent his enduring love of Wales. 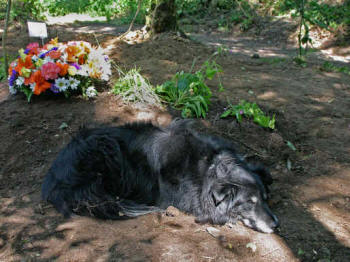 The last to leave the grave

Bill’s dog Shiela. She died a year later and has been buried near her master.

This website uses cookies to improve your experience while you navigate through the website. Out of these cookies, the cookies that are categorized as necessary are stored on your browser as they are essential for the working of basic functionalities of the website. We also use third-party cookies that help us analyze and understand how you use this website. These cookies will be stored in your browser only with your consent. You also have the option to opt-out of these cookies. But opting out of some of these cookies may have an effect on your browsing experience.
Necessary Always Enabled
Necessary cookies are absolutely essential for the website to function properly. This category only includes cookies that ensures basic functionalities and security features of the website. These cookies do not store any personal information.
Non-necessary
Any cookies that may not be particularly necessary for the website to function and is used specifically to collect user personal data via analytics, ads, other embedded contents are termed as non-necessary cookies. It is mandatory to procure user consent prior to running these cookies on your website.
SAVE & ACCEPT